Everyone knows that politicians will break promises. In fact, there are plenty of times when it’s actually the right thing to do. The word “lying” or “liar” has been so abused that people don’t really understand it anymore. If you break a promise, you’re not a liar. If you change your mind, you’re not a liar. Lying is deliberately telling an untruth with the intent to deceive.

This isn’t about the Abbott Government’s treatment of Refugees and Asylum Seekers. They told us exactly what they were going to do and they did it. Australia voted for “towing back the boats”. Australia voted for keeping children in concentration camps. Shame on us and many of us may not like it, but the Abbott government was honest about it, and did what they said they would do.

This isn’t about Climate Change. They dismantled the Clean Energy Finance Corporation and have taken every step they can to remove the Carbon Tax and any shred of real action on Climate Change. Many of us may not like it, and it may end up being be the single stupidest act in Australia’s history, but the Abbott government was honest about it, and did what they said they would do.

On a range of other issues, the Abbott government was honest, and did what they said they would do.

The Charter of Budget Honesty introduced by Peter Costello meant that incumbent governments could no longer claim that finances were better than they actually were, but also that incoming governments could no longer claim that they were worse than they actually were. The end of the predictable “Budget Black Hole” that allowed incoming governments to have an excuse for breaking a bunch of their promises (“core” vs “non-core”) was no more.

The magnitude of the budget deficit and net public debt have not changed since before the election, except due to decisions made by the Abbott government since the election, and those decisions haven’t made a significant change to either. So the circumstances haven’t changed.

This means that so many promises made by Tony Abbott and Joe Hockey before the election were lies. They never intended to keep those promises. They made them with the clear intent to deceive. The circumstances have not changed. There is no foundation for this complete reversal of their policy platform. They were banging on about the need to reduce debt and the deficit before the election and that continues to be their mantra. That part is perfectly fine. But now we find that the actions they want to take to address that deficit and debt are completely the opposite of what they told the Australian public before the election.

Why couldn’t they have had the courage to take their true policy platform to the election? This was their plan all along, they just didn’t have the intestinal fortitude to stand behind it before the election, pretending they would do something else until they were safely on the government benches.

This is not so much about WHAT the Abbott Government has done, this is about HOW they have done it. We’ve always known their conservative position on a number of issues. That’s why a lot of people vote for them. But I guess they knew if they told the whole truth, there would be a certain segment of the voting public that wouldn’t vote for them: the swinging voters. Those who actually decide the election outcome. They aren’t rusted on to either end of the political spectrum, and make their decision each time they vote, based on the performance of the government and what the opposition says they’ll do if they are elected.

The Abbott government is a bunch of gutless wonders. They don’t have the courage of their convictions. They actually lied to their own supporters! And now they’re lying about the lies, in true Orwellian style, by saying they didn’t break any promises. At least Julia Gillard admitted that she broke her promise on the carbon tax.

The Abbott Government is a pack of cowards.

I’ve often joked with my computer geek friends that if I was stuck on a desert island and could have only one program, it would be Microsoft Excel. Which is amusing on a number of levels: I have a long history of Microsoft bashing; Excel is not very well known for anything other than number crunching; Real Programmers™ tend to pooh-pooh VBA (the programming language in Excel).

But Excel is incredibly versatile. You can use it as a word processor, the formatting is great, the built in formula language is great, using VBA lets you turn spreadsheets into applications, and more. I even used it to design the kitchen and bathroom tiling for the Electron Workshop.

But a 70+ year old Japanese artist has taken it to an entirely new level: Using Microsoft Excel to create art. 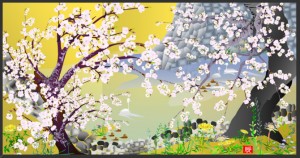 I love making sushi. A few years ago for my birthday I was given the book Sushi Modern

by Hideo Dekura. He describes Sushi Modern as “presenting sushi as an edible art form, exploring new ideas, and creative arrangements and combinations of modern ingredients that make sushi a truly modern food.”

In keeping with this philosophy, over the past few years I’ve experimented with various techniques and ingredients, with varying degrees of success. I won’t mention the worst failures, but the Aussie sushi (ham, cheese and tomato) was certainly memorable. On the more successful end of the scale, I like to use the savoury tuna or salmon that comes in flavours like Penang Curry or Thai Chilli (for the non-vegetarians), and sushi omelette also proves very popular. It helps a lot to have a (square) sushi omelette pan.

Recently I made gourmet pizzas and had some left-over ingredients – grilled eggplant, capsicum and artichoke hearts – and thought these might be interesting in sushi. They proved to be a major hit. I made a couple of maki-zushi (large hand rolls) with these ingredients, and they disappeared very quickly.

So I present: Antipasto Sushi. 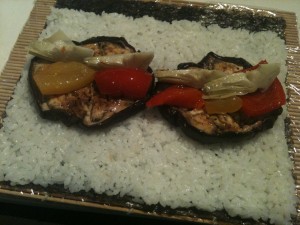 If, like me, you switched your iPhone to 3 because they offered great plans and didn’t gouge for data and tethering like Optus and Telstra, but found their coverage patchy at best, and their roaming data charges obscene and unavoidable, be aware that they will switch you to Vodafone on a cheaper plan for basically the same data and call cap. You pay for only the cost of paying off the phone – which could end up costing you nothing due to plan savings and no roaming data charges. Just make sure they unlock the phone from their network before porting your number!

Camping at Easter has been a family tradition of ours for a few years now. Most of our favourite places were burnt out by the Black Saturday bushfires, so this year we decided to head for the Great Otway National Park. We eventually came to Dando’s camping ground near Gellibrand. Before leaving, I decided to grab my trusty old Nikon FM film SLR camera. I’ve used this fantastic camera for a few years now and I just love it. It was manufactured in 1977, and I have intentionally not added a flash to it so I am forced to find decent natural light for shooting. It’s a very simple SLR and I almost exclusively use a simple 55mm Vivitar lens that came with the camera. The camera came from my Uncle Michael who sadly passed away at the too-young age of 54 in 1993, and was a keen photographer.

I discovered that I had three exposures left on a roll of film in the camera. One of those lovely mysterious discoveries you can only have with a film camera – the what/when/where of photos that were taken but not developed. In this case, they were an absolutely beautiful set of photos of Deb and the kids (and a couple of me!) from the summer of 2008. I may post some of those later.

So I took three photos with the remaining film. I hope you like them.