Camping at Easter has been a family tradition of ours for a few years now. Most of our favourite places were burnt out by the Black Saturday bushfires, so this year we decided to head for the Great Otway National Park. We eventually came to Dando’s camping ground near Gellibrand. Before leaving, I decided to grab my trusty old Nikon FM film SLR camera. I’ve used this fantastic camera for a few years now and I just love it. It was manufactured in 1977, and I have intentionally not added a flash to it so I am forced to find decent natural light for shooting. It’s a very simple SLR and I almost exclusively use a simple 55mm Vivitar lens that came with the camera. The camera came from my Uncle Michael who sadly passed away at the too-young age of 54 in 1993, and was a keen photographer.

I discovered that I had three exposures left on a roll of film in the camera. One of those lovely mysterious discoveries you can only have with a film camera – the what/when/where of photos that were taken but not developed. In this case, they were an absolutely beautiful set of photos of Deb and the kids (and a couple of me!) from the summer of 2008. I may post some of those later.

So I took three photos with the remaining film. I hope you like them. 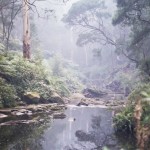 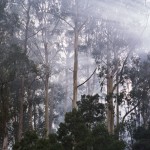 Morning Mist in the forest, Dando’s 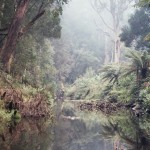